INTRODUCTION:-
Welcome everyone welcome back to another article on my gaming website today in this article we all guys are talking about a very special topic and that is pubg PC Lite new update yes guys today we all guys are talking about player unknown battlegrounds pC Lite India new update which is recently launched globally if you are already playing the older version of this game do you guys must know that the new update of this game has recently launched, and actually a lot of you guys have already updated their game to this next updated pubg game. But a lot of people actually don't know that which thing is new come in this game and today in this article I am going to tell you that which is the best thing that has came in this mode in pubg PC Lite. 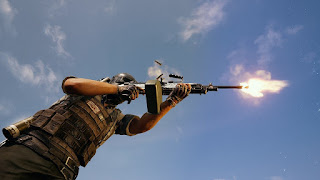 WHAT'S NEW:-
SEASON UPDATE:-
So as I told you there is a new season update where launched in this game so now there are season wise contribution will be there of this game, as we always know that in pubg mobile there where season provided like season 1, season 2, you and the currently the season is going on for the latest season, the latest current season Where are available right now is season 8 so the starting of this season is starting from 1 like season 1 so now same as like that the pubg PC Lite came also lost their first season now this season is going to increase currently only first season where launched because this game is launched globally in 2019. Short run sometime there is second season where launched so it keep on going. All the users need to gain for need to earn their tier whether it is bronze, gold, silver, diamond, platinum,etc. After the new season launched all users tier where detected depend on which place they have. Same as like the pubg mobile game and I hope that we all guys have played the player unknown battlegrounds mobile game because everyone having mobile right now and if a game like pubg where comes in mobile then we just have to play it and we have play it. So this is all about the Seasons In this game yeah sure the first season is launched.

4 VS 4 UPDATE:-
Now let's talk about 4 V 4 update show the meaning of this is actually 4 versus 4 so as you always know that in the player unknown battlegrounds game if we play with our friends or random teammates then the amount of random players we get r 3 including us it comes up it 4 show the full squad is of four players 4 versus 4 in pubg is like squad versus squad like 1 squad is going to play a match against the other squad and as I already told you that was called contains 4 players, so if the fun squad is going to play against this other squad should definitely 4 players are playing against 4 players, that is why the name of this new update is 4 V 4 in pubg PC Lite. So if you guys are know the pubg mobile have recently lost on you more called TDM the full form of this is total deathmatch same like that the pubg lite has launched this 4 versus 4 match new feature in this we have a specific space where we are going to spawn at once side and the other four players where spawn on the other side of US. Then they were going to attacking on us and we were going to attacking on them. And this mode is amazing it gives you an another level of joy while playing it. So this is all about the 4 versus 4 match update in pubg PC Lite.